It’s back and bigger than before! We have added FOUR additional weeks for you to get in on some Fourth Quarter Frenzy!!! 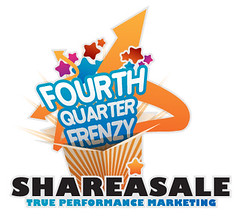 Are you ready to win big with ShareASale this Q4? You better be! Every single week from October 3rd – December 24th, we’ll be raffling off a frenzy of fantastic prizes for ShareASale affiliates…and one lucky affiliate will be the recipient of a phenomenally fun trip for two to our very own, much beloved Chicago!

How it works:
Each week, every ShareASale affiliate who has driven at least $10,000 in sales since October 3rd, 2010, will be entered into a drawing to win a prize from one of our sponsors. We will have one drawing every week during the promo period.

Additionally, if you accumulate at least $100,000 in sales during the entire promo period, you will be eligible for our grand finale prize…a trip for two to Chicago, air and hotel included. (Plus some other fun activities! We’ve got a whole package of fun planned!)
Qualifying weeks will begin Sundays at 12:00am CST and end Saturdays at 11:59pm CST

*Weekly drawings will be held and announced on the proceeding week of each weekly contest. Only the winner’s first name and state will be announced for privacy reasons. Qualifying affiliates can only win one weekly prize for the Q4 frenzy but are eligible to win a weekly prize and the “grand prize”. International winners have the option to receive the weekly prize or the value of the weekly prize deposited into their ShareASale account. Once a weekly winner is notified they have 7 days to contact Jason Rubacky at Jason at ShareASale dot com to claim their prize. If the prize is not claimed within 7 days we will redraw for a new winner. Prizes will be drawn from by an official ShareASale employee.